Get the code for this article here

With the introduction of the Flask command line interface, one of the more annoying things you have to do during development is set the environment variables each time you work on your app, namely FLASK_ENV and FLASK_APP. Well, Flask has a way for you to handle those things in a way to where you only have to do it once. And through the same functionality, you can also add other environment variables for your project. In this article, I'll show you how to use python-dotenv to have your environment variables loaded and ready to go every time you run your app.

The one package that makes this all work is python-dotenv

I'm going to demo how this works through a very simple Flask app.

Let's start by creating the directories and empty files we'll need. This is what our project directory will look like:

This app won't do anything special. It'll just show us what configuration values we have.

Set Up The Project

To start, on the command line create a new virtual environment and install flask and python-dotenv. I use pipenv, so I can do this all in one step:

Next, in your demo/init.py, we'll need to create the basics of a Flask app, which means importing Flask, creating a application factory function (create_app), and instantiating Flask. Here's the code to do this.

If you've worked with Flask at all, then you know exactly how this works.

Next, let's add in a simple route so we know our app actually works.

Once we've done that, we can use the Flask CLI to run the app. To run the app, use the following command while in the top level directory of your project.

But when we do that, we already get an error!

This is a common error though. Normally, to fix this, we would export the environment variable FLASK_APP to be equal to the name of our app directory like this:

But since we're using python-dotenv and we want to avoid the inconvenience of using the command line, we'll have this load automatically by putting it in one of our dot files.

We have two dot files: .env and .flaskenv. We want to use .flaskenv for any Flask CLI configuration commands and use .env for our app configuration.

We'll put our FLASK_APP enviornment variable inside of the .flaskenv file.

Now that we've added that one line, let's try running the app again. 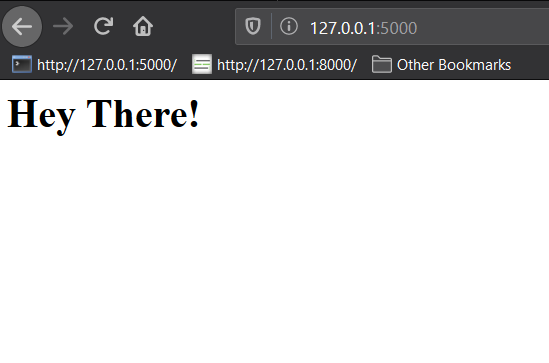 Note the message that appears on the command line that says we aren't in debug mode.

Now if we were to stop working on this project and come back later, all we would need to do is use flask run and the app will start up without having to specify its location again.

Let's say we want to modify some other Flask CLI options, we can put those in our .flaskenv file.

Here are some options:

I think the most common ones you'll use are FLASK_ENV, FLASK_RUN_PORT, and FLASK_RUN_EXTRA_FILES, so I'll create examples with them here.

Let's start with FLASK_ENV. By default, it's 'production', which doesn't do anything noticeable. The point of the environment though is so you can decide on what actions to take in your app depending on the environment. For example, you could do something like instantiate the Sentry library for error logging when in production but not development.

If you change your FLASK_ENV to development, the biggest change you'll see is the reloader starts working and your app gets put into debug mode. So let's set that value in our .flaskenv file.

Let's stop the server and run our app again.

Notice how the message changes now.

Let's add another one for the port.

After restarting, we'll have to access our on through port 8080:

What if we don't want to have to stop and restart our app when we change non-py files in our project? We can use FLASK_RUN_EXTRA_FILES for that. For example, to watch a files called config.yml and README.md

(If you are on windows, you'll need to use a semicolon (;) instead of a colon (:) to separate multiple files)

Now that we've worked with .flaskenv, let's move on to adding variables to the .env file. We'll use these in our app.

One advantage of having .env hold our app environment variables is that we can easily have multiple versions of the file for each place we run our app. For example, we can have one for our local machine, one for a staging environment, and one for production, etc.

Unlike the values prepended with FLASK_ in our .flaskenv file, the variables in .env aren't meant to work for us automatically. Instead, we need to load them into our app. For that, we'll use the settings.py file.

Inside of settings.py, let's import environ from os so we have access to our environment variables.

Next, we need to assign those variables to Python variables, and then later we'll load them into our app.

We don't need to use the same name for the variable in Python as we do for Python, but I like to do it for consistency purposes.

Next, let's add the configuration from this file in our init.py.

Now our environment variables are ready to use. In the case of SECRET_KEY, normally some Flask extensions we use would pick this up and use it automatically. For the API_KEY, we would need to use this directly in our code.

In our code, we'll simply display the API_KEY in our route.

If you want to use your .dotenv files in production, you have to make a small change because you won't be using the Flask CLI on a production server.

If you want to see this work, you can install gunicorn so you don't have to use the development server for Flask.

We need to create a file that gunicorn can find the app object in. For this, we'll create run.py. Let's start with the standard code that doesn't load the environment variables, which is only two lines.

This should run on port 8000 by default. If you navigate to the index, you'll see the value of API_KEY is None.

This is because the environment variables are no longer being loaded for us. To load them, we'll have to use the load_dotenv function from python-dotenv. We only need two add two more lines of code:

Now if we start the server with gunicorn again we'll see our API_KEY value.

Now you should understand how python-dotenv can be used in your Flask project to make handling Flask CLI configuration and general app configuration more convenient.

You'll be able to leave and come back to your project without having to re-set your environment variables, and you'll have a flexible way of having multiple configurations depending on where your app is running.